In the two months since President Trump announced that he would withdraw American troops from northern Syria, Russia has used its military power to remain a major political force in the strategically-important Middle Eastern country. Now Vladimir Putin’s government is beginning to exert some soft power in the area. Agencies from Russia and Syria have signed a deal that will attempt to restore a major cultural and historical site that was destroyed during Syria’s eight-year civil war.

According to the Art Newspaper, the two governments signed an agreement this week pledging to restore the ancient city of Palmyra, in central Syria. Palmyra was heavily damaged and looted in 2015 by the militant group ISIS, which also destroyed other major sites in Syria, Iraq, and Libya. Among the almost dozen significant cultural losses in Palmyra were its Temple of Bel, the Temple of Baalshamin, the Lion of Al-lāt statue, the Tower of Elahbel, and Arch of Triumph. 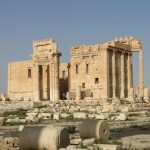 Russia’s State Hermitage Museum leads three governmental entities engaged in the effort along with the Russian Academy of Sciences’s History of Material Culture and Syria’s Directorate General of Antiquities and Museums, which is part of the country’s Ministry of Culture and oversees its ancient sites.

On its website, the Hermitage said, “Both agreements are a tangible step in the significant development of museum and research ties between Russia and Syria.”

Among the first steps proposed through the deal are the restoration the National Museum of Palmyra, along with the refurbishment of 20 Syrian antiquities and the formation of international working groups that will help restore the city.

The Hermitage, which is the second largest museum in the world, holds several artifacts from Palmyra in its permanent collection and its director, Mikhail Piotrovsky, has called for the ancient city’s restoration since April 2016 and offered the museum’s expertise.

In an interview at the time with a publication called Russia Beyond, he said of Russia’s involvement in Syria, “If all this works, we will once again get an indication that the rights of culture are the most important. And that we all are ultimately fighting for culture. If the result of our operation is the liberation of Palmyra, we will never find anything more beautiful in the annals of the whole of Russian history in the Middle East and the Holy Land.”

According to a 2018 article by the Russian news agency TASS, the Hermitage had previously created a 3-D model of Palmyra that would help reconstruct the destroyed parts of the city. That model had been given to Syrian representatives in 2017 at the International Cultural Forum in St. Petersburg. “Information is being collected and studied, and various consultations are underway on what to do and how to do it,” Piotrovsky said at the time.