Once you’re famous there’s just no way to keep your letters out of the hands of the curious! Letters give us a humanising insight into the private world of an artist. They can provide a glimpse into their daily life, travel, friendships, moments of joy and despair as well as their creative process – that’s why we love to read them. And there’s a strange pleasure too in seeing the handwriting of an artist that we admire.

Pages from the album of Ethel Fairweather 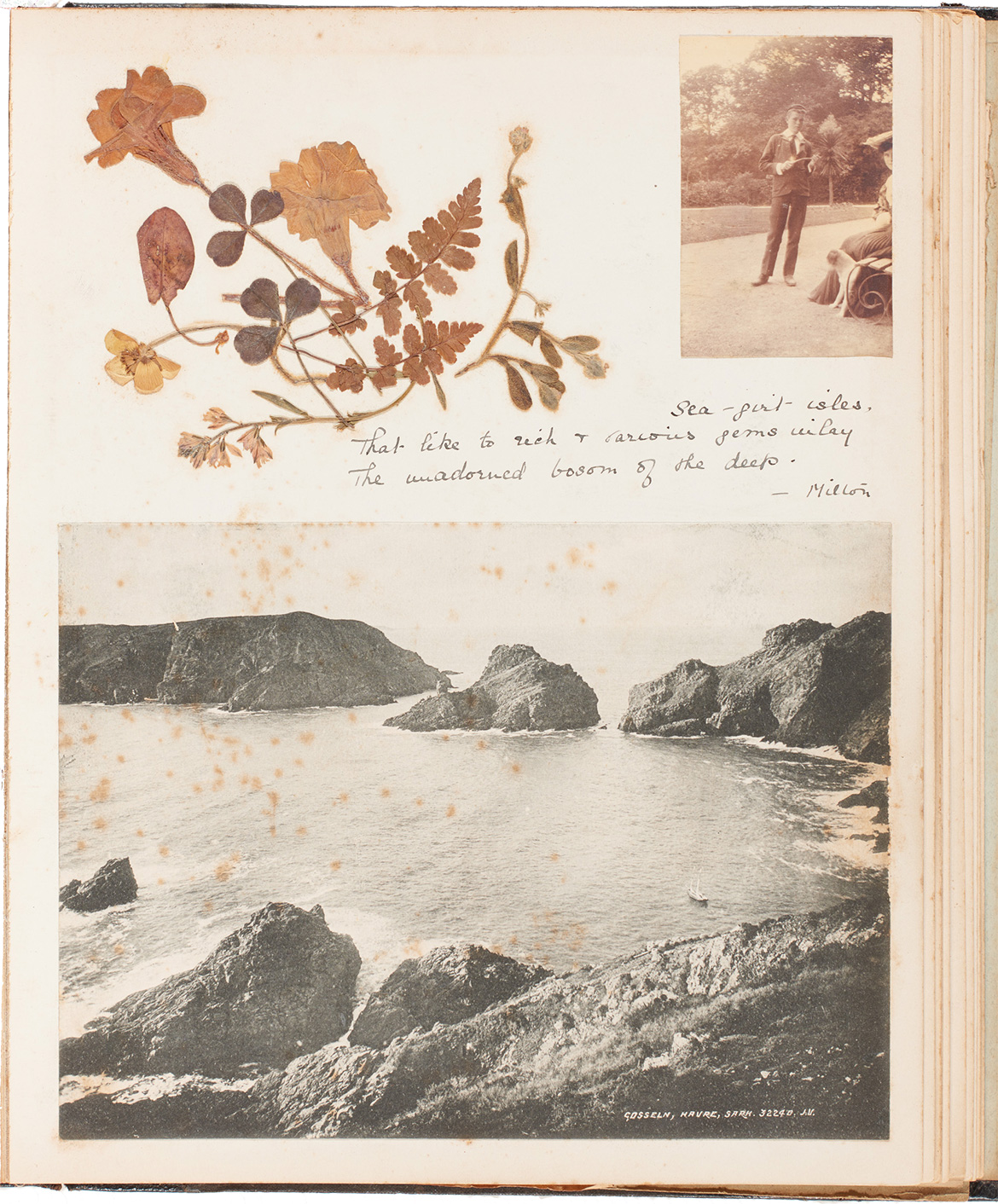 Testimony of friendship: The letters of Ian Fairweather to Marion Smith

After leaving the peaceful English Channel island of Jersey where renowned artist Ian Fairweather (1891-1974) was raised, his life was characterised by travel and turbulence until he settled on Bribie Island off the north coast of Brisbane, Queensland, at the age of 61. During the next two decades, the famously reclusive artist frequently corresponded with friends and family and many of his letters survived, including those he wrote to Marion Smith which are now held in the QAGOMA Research Library.

Marion Smith (1938-2008) was born in Sandgate in Brisbane and after living in Deagon, Red Hill and New Farm in Brisbane, she moved to Paddington in Sydney. She worked as a stenographer at the University of Queensland, Brisbane, and helped Fairweather type the manuscript for The Drunken Buddha (University of Queensland Press, 1965), his English translation of a popular Chinese tale which he illustrated with his paintings. Smith visited the artist on Bribie Island and through that initial contact, they became penfriends.

As well as being a testimony to their friendship, the letters shed light on Fairweather’s personality, his day-to-day existence on Bribie Island and his sadness as Bribie changes with the opening of the bridge connecting it to the mainland, his enduring love of nature, fascination with the Chinese language, reading habits, quirky and quarrelsome nature, and his evolution as a painter.  The letters between the two friends are at times poignant, funny, troubling and occasionally, a heartbreaking read.

I’m blessing you. I think you must have been reading my mind. I have been needing a wooley badly for long − but couldn’t get one – and this is a lovely wooley. Really bless you – I’m wearing it and warm for once – I hate these long cold nights – for it is only at night I can believe in things – but when it’s cold I can only think how cold it is − Well, that’s wonderful news. Your going to England – I wonder if it will be London. How much I would like to show you around some of the old haunts – The Galleries – the little cafés in Soho – Dear old Chelsea where Turner used to paint his sunsets and the long haired Bohemians in the Cafe Royale. Dirty old London – But at least you will be there when it is warm – Your letter I fear finds me in the depths – I have just sent off some paintings that I’m ashamed of – and the future is black. Hey ho – well if anything could raise the temperature – your wooley will help – I’ll be blessing you and wishing you a nice trip – and quick return.

PS. You ask about the price of the Belle Hollandaise – she was once a picture but now she has become a flying saucer – so what about you. 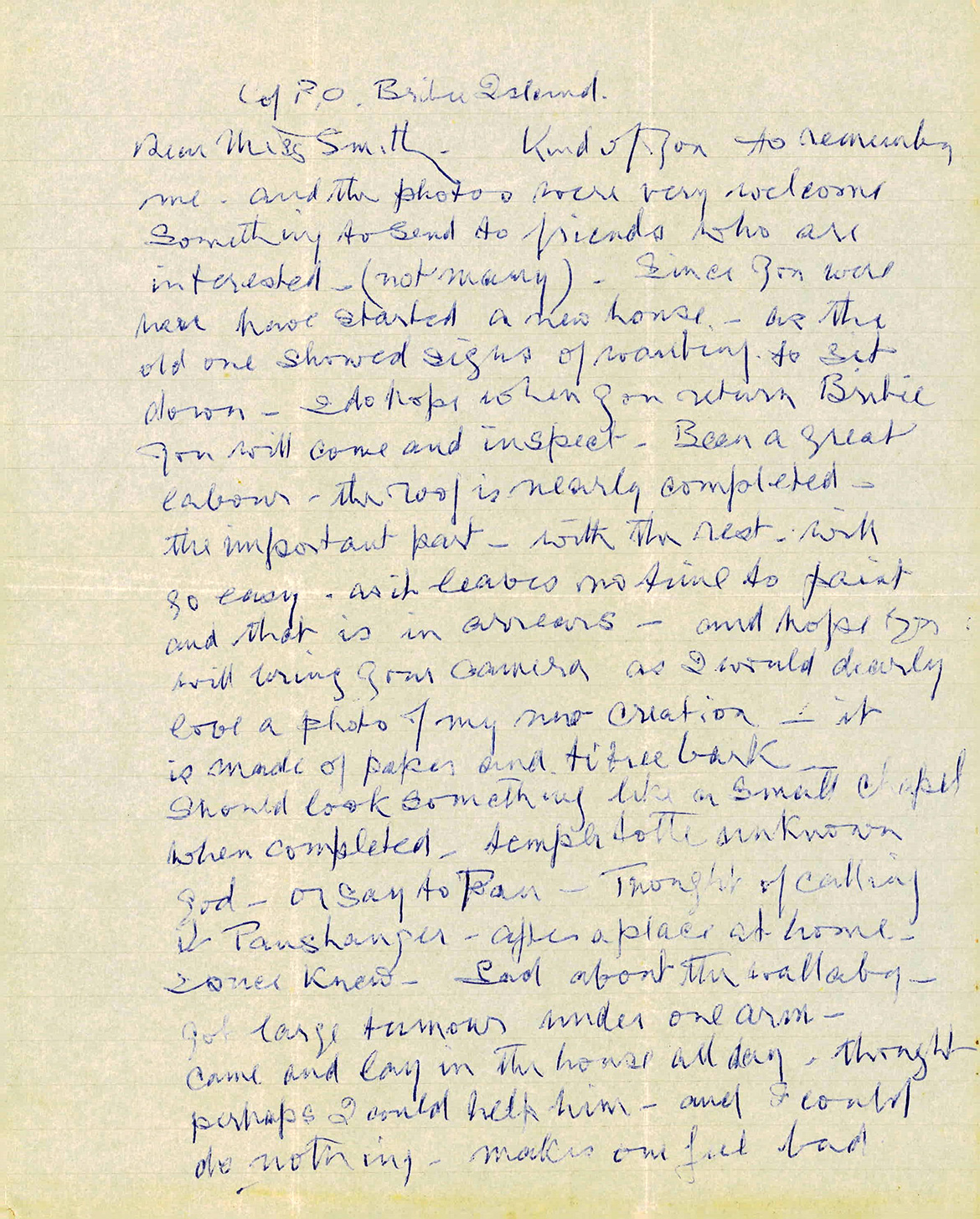 Kind of you to remember me and the photos were very welcome. Something to send to friends who are interested (not many). Since you were here have started a new house, as the old one showed signs of wanting to sit down. I do hope when you return to Bribie you will come and inspect. Been a great labour —  the roof is nearly completed — the important part — with the rest — will go easy as it leaves no time to paint and that is in arrears — and hope you will bring your camera as I would dearly love a photo of my new creation — it is made of paper and ti tree bark. Should look something like a small chapel when completed — temple to the unknown God — or say to Pan. Thought of calling it Panshanper after a place at home I once knew. Sad about the wallaby — got large tumours under one arm — came and lay in the house all day — thought perhaps I could help him — and I could do nothing — makes one feel bad.

I think now he must be dead — long time no see. The butcher birds are still here — pipe up every morning for cheese — wouldn’t let me forget — but the goannas which were getting wonderfully tame have holed up for the winter – I envy them. I freeze in the winters too, but can’t sleep it away as they do.  Well I can sympathise with you transiting every day by train up to B – always  standing on the way home unless you are lucky to grab a seat only advantage – pay check at end of week – and one amongst many – art a lonely furrow and no pay check awaiting – if it turns up it’s a miracle. One builds a house but one never knows if one will get to live in it.

So long, cheers and all the best

PS  This drawing lying about – send it – souvenir of B.

Join us at GOMA

The letters in the QAGOMA Research Library were donated by the Estate of Marion Smith through the Queensland Art Gallery Foundation in 2013 and include 59 holograph [handwritten] letters by Fairweather, four Christmas cards, 19 original draft letters from Smith to Fairweather, and scrapbooks containing press clippings, photographs and drawings.

A selection of original letters written by Fairweather to Smith is currently on display in the QAGOMA Research Library until Friday 8 November 2019, along with a photograph album compiled by Fairweather’s sister, Ethel. This display gives anyone fascinated by the paintings of Fairweather an opportunity to look at the man behind the work.

Visit the QAGOMA Research Library on Level 3 of the Gallery of Modern Art (GOMA), open Tuesday to Friday from 10.00am to 5.00pm, explore the online catalogue or visit the onsite studio.

Ian Fairweather: A Life in Letters

The display coincides with the launch of a new book, Ian Fairweather: A Life in Letters (Text Publishing, 2019), edited by Claire Roberts and John Thompson and supported by the Australian Research Council, QAGOMA, and former Gallery trustee Philip Bacon AM.

Ian Fairweather: A Life in Letters includes 354 transcripts from the 700 known letters written by Fairweather. Given the Fairweather’s solitary and singular life his dedication to correspondence can be seen as a paradox and a form of communication that best suited his choice of lifestyle.

Available from the QAGOMA Store and online.