The Collins Park Rotunda across from the Bass Museum in Miami Beach is rumbling with the engines of a Norwegian marine research vessel. It’s a few days before the opening of Art Basel, and sound artist Jana Winderen has transformed a circular concrete space into an undersea soundscape that will play throughout the fair. She’s hunched on a beanbag in the dark, testing a 22-channel ambisonic speaker system, and it feels like the building might launch from the moat that surrounds it.

“The ship should shake you,” Winderen says, monitoring volume levels on a screen.  “That’s when the beanbags vibrate.” Winderen and Tony Myatt—the designer of the sound system and Winderen’s collaborator and friend of 10 years—have so far spent most of their stay in Miami happily deprived of light, inside the Rotunda with their eyes closed and ears attuned to hydrophone recordings featured in “The Art of Listening: Under Water,” an eco-sound installation commissioned for Art Basel by the Swiss watchmaker Audemars Piguet. They’re playing me samples, and I request the sound of the toadfish, a local favorite. Myatt suggests “the back end of the humpback whale, going into the sea.” On cue, the room surges and a 30-ton mammal takes us under. 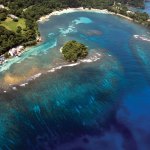 In past collaborations with mutual friend and storied field-recordist Chris Watson, Myatt has used ambisonic sound to evoke the spatial acoustics of elephant communications undetectable to the human ear and celloistic whale calls reflecting off underwater cliffs. Winderen, who grew up on a farm in Norway, is equally concerned with representing smaller, more invisible marine species who refuse to go quietly against the intrusion of anthropogenic noise pollution in the seas.

Fish relate to their bubbly, diverse environs through sound and an acute sense of vibration that is key to their survival. Obtaining food, not becoming food, perpetuating their populations, and so on. Noises from ocean-going vessels—which ecologists call “insults”—can disrupt fishes’ delicate navigation systems, which are centered in a stone otolith behind their inner ears as well as tiny hairs that serve as motion sensors. “Fish may be using sound to orient toward each other,” Winderen said. “They need to understand the space they are in, the area where they are traveling, and they may be informing each other about their place.”

Marine life has “a visceral sense of sound and consequence,” according to Hear Where We Are: Sound, Ecology and Sense of Place by Michael Stocker, a marine biologist who once designed arena sound systems for the ’70s rock band ELO and funk astronaut George Clinton. Winderen, who packed a copy of Stocker’s book for Florida, has been amplifying and clarifying marine life through installations and musical releases created from field recordings made in locations far and wide, among them the Barents Sea between Norway and Russia and waterways around Thailand, Belize, the Dominican Republic, and, now, Miami. All are bound by an alarming commonality: human impact and disregard. “Everything I do is recordings from places I’ve actually been,” Winderen said. “It’s not for the sounds’ sake—it’s for the places and the issues. We have colonized the planet with our sounds. I don’t like to talk about nature as something ‘other’ than us. I’d rather talk about it as the environment. We are all part of it.”

Winderen struggles with her own role as a potential noise-maker, often working in boats with grating engines to gather her sounds. (She prefers to use her own rowboat when she can, but calving glaciers and tsunamis count as work hazards for her.) The ship noise that figures in her Art Basel composition dates back to a trip she took to study cod otoliths in 2007. “It was the first research vessel I was on,” she said. “We have these huge ships that make this massive noise. Compared to the ships, the animals totally disappear. They cannot hear each other. We cannot hear them.”

‘The Art of Listening: Under Water” is also about what you don’t hear but can imagine—a realm where coral is cathedral. The installation encourages awareness of undersea species and how our actions might affect phytoplankton that are responsible for 50 percent of the world’s oxygen. It’s also about taking a deep breath and listening to land as well—by way of recordings made with hydrophones, a water-purposed technology, enlisted to capture shifts of sand, dirt, and ice. All of it together offers a way to learn how different earth media interact and relate to our precarious place between.

“We’re making the piece in situ, making it for the space,” Myatt said as traffic noise filtered through from outside, adding more benthic ambience to the room. Inside the Rotunda’s small antechamber, trickles of drainage could be heard in the walls, from the small outer pool upon which the building appears to float. Droplets drifting into the soundscape serve as a reminder that water is ever present in the Florida psyche.

Collaged and mixed inside the Rotunda over an intensive four days, the composition follows a sort of site-specific narrative and will play on a loop throughout Art Basel. The space itself is encased by a brutalist sand-cast facade created in 1962 by sculptor Albert Vrana. (A water-based environmentalist himself, Vrana lived with his family on a sailboat.) “The building itself is very expressive and present,” said Winderen. “It can also be a place where people can be at peace and sit for a while.”

Sounds from a 10,000-year-old glacier melting in Greenland inhabit a building whose granular materiality (sand quarried from Miami in the ’60s) is tuned to an ancient underwater sound memory of former marine life from times when ice receded and sea levels rose to form what is now the state of Florida. “I like to think about the creatures being the source of the sand,” Winderen said. “We can think about a memory of sound in the sand. I did a project in Gotland, Sweden, about the memory of sound from when the creatures that become sand were living. Transducers and solar panels were installed in old boats.”

The Miami installation also includes local recordings from a field trip out to Key Biscayne, past the Fowey Rocks Lighthouse. “We could see all these massive yachts,” Winderen said of the Florida waterways. “They are not quiet. It’s so out of balance. The environment here—there’s not enough coral. There are too many stress factors.”

Related to Winderen’s “Silencing of the Reefs,” an ongoing project engaged in diagnostic listening with a mind for the acoustic health of coral, “The Art of Listening: Under Water” comes at a time when Miami is facing mounting issues related to climate crisis and local urgencies from which a massive art fair might seem disconnected. “With Art Basel, I am a bit back and forth about how I actually place myself in this,” Winderen said. “If I start with melting-ice and raising-wave sounds, this would mean something different for an audience in Miami than in Norway. But there will be audiences from all over visiting an art marketplace, with different thoughts in their heads.”

‘Put your snorkels on,” Myatt said as we entered the Rotunda in which a ship approaching from a distance sounded like dread. Snapping crustaceans suggested a campfire (or, more pointedly, global warming). A glacial shift evoked an uncomfortable scrunch of haunches on a leather couch.

“We encourage people to close their eyes,” Myatt said. “You hear way more spatial detail with your eyes closed. An ambisonic configuration has more spatial information in it, to convey the presence of coral reefs. We still live in this legacy of Jacques Costeau’s so-called ‘Silent World.’ We’re not hearing stuff coming up from the oceans, so it’s invisible to us.”

Myatt showed me a marine tracker app that maps shipping routes in real time. “It shows the vessels in our vicinity,” he said, zooming in on the Port of Miami. “If you look at it on a global scale, you see the shipping routes—the density of clear roads across the ocean. The purple ones are supertankers, probably the size of a small city, floating across.”

“In Thailand, when we were out in the boat, they would turn off the engine,” Winderen said. “You practice putting your head down, inside the boat belly, and you can hear all around you. Also, by putting an oar to your head, [you can hear] through bone conduction.”

Bone conduction, which is how much certain marine life receives direct sonic input, has been used by Beethoven, invasive adware companies, and anyone who’s ever stuck their fingers in their ears while in the shower. In her book Aqua Viva, Brazilian writer Clarice Lispector refers to it as “the last substratum of reality’s realm.”

Bone conduction also informed Winderen’s childhood. Her mother, an ardent environmentalist, played the saxophone, and her grandfather was an ear, nose, and throat specialist and a conservationist as well. “Very early on, I was introduced to thinking about listening and bone conduction with these tuning forks that my grandad put on my head to check hearing,” Winderen said. “He also recorded my voice on the reel-to-reel, to play for hearing tests. This is still on the farm where I now have my studio.”

The Rotunda piece follows another installation that Winderen made for Art Basel in Switzerland, based on recordings from forests there and considerations of the sonic memory of spruce trees, the best wood for musical instruments, and what might be most suitable for sound transmission by oars. Tree memory and nostalgia for oars bridged Switzerland with her work in Thailand—as ideas from her projects tend to seep into one another.

“The oar to the head, the resonating—what kind of wood is good to transport the sound from the water to the skull? We worked on that in Thailand,” Winderen said. “Spruce trees have been experiencing big changes in the sound environment for 300 years. I was thinking about the sound history in the trees’ rings and how they relate to fish. Pike have this otolith ear stone, which also has rings.” (Also, it so happens that the 7th International Congress of Bone Conduction Hearing is gearing up to take place in Miami next week, after Art Basel is through.)

As Winderen took a break from making some final adjustments to her installation, we sat in Collins Park outside the Rotunda with the sun blaring. A car blasted by with a sawed-off muffler. An airliner smeared its engines across the azure sky. The door to the Rotunda had been left ajar, so for a brief spell the undersea sounds spilled into the park—via channels of Winderen’s memories spanning the Arctic to the Caribbean.

I heard a sequence of powerful rhythmic swells that turned out to be the sound of Winderen’s oars, with the wavelengths slowed down through a recording technique called time-stretching. “I was in my own boat, with two hydrophones behind,” she said of a journey on the water around where she’s spent most of her life in Norway. “I cut all the high frequencies and equalize the low frequencies. In the story of the piece, it is the section where I’m rowing through the cold waters together with humpbacks—in my head. That’s how it makes sense to me, to create these stories.”