May Stevens, a key figure of the feminist art movement of the 1960s and 1970s, died on Monday at age 95 in Santa Fe, New Mexico, according to Ryan Lee, her New York gallery. A cause of death was not immediately available.

Stevens was known for her monumental paintings that dealt with social and political issues, as well as her activism, teaching, and writing. The artist used personal experiences and her responses to racism and oppression to inform her works, which span painting, collage, drawing, and prints.

She produced one of her most famous series, titled “Big Daddy,” between 1967 and 1976. Those works, which depict middle-aged white men in a Pop register, address racial bigotry and the Vietnam War. Two such works are currently on view at the Museum of Modern Art in New York and in the traveling exhibition “Artists Respond: American Art and the Vietnam War, 1965–1975,” now on display at the Minneapolis Institute of Art. The artist began her last major body of work, the “Women, Words and Water” series, in the 1990s. Those pieces poignant represent meditations on loss and grief. 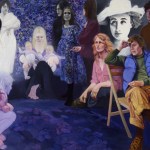 Born in Quincy, Massachusetts in 1924, Stevens studied at the Massachusetts College of Art, the Arts Students League in New York, and the Academie Julian in Paris. After settling in New York with her husband, the artist Rudolf Baranik, she became a participant in the Civil Rights Movement. Martin Luther King, Jr. wrote a catalogue introduction for her 1964 exhibition “Freedom Riders” at Roko Gallery in New York. In 1976, she became a founding member of the magazine Heresies: A Feminist Publication on Art and Politics, which was published until 1992. She taught at the  School of Visual Arts in New York from 1961 to 1996 before relocating to Santa Fe.

Stevens’s works can be found in the collections of the Museum of Contemporary Art in Los Angeles, the Whitney Museum and the Metropolitan Museum of Art in New York, the National Museum of Women in the Arts in Washington, D.C., and other institutions. An exhibition dedicated to Stevens’s study of the political activist Rosa Luxemburg will continue at Ryan Lee gallery in New York through December 17.