Saskia Noor van Imhoff is an Amsterdam-based artist whose photographs and sculptures explore systems of perception. She often takes apart familiar objects and recontextualizes them, always building on her own previous works. Her show of new pieces at Grimm gallery in New York, titled “#+40.00,” incorporates colored plexiglass, neon tubing, plaster molds, and aluminum casts, as well as parts of a museum climate control system. These last components are from the humidifier van Imhoff utilized for “#+23.00,” her 2016 exhibition at the Stedelijk Museum in Amsterdam, which mined the institution’s collection and architecture. Fittingly, we met to discuss her first New York solo (on view through December 13)—set in a basement gallery filled with a thick layer of salt—during New York’s inaugural snowfall of the season. Below, the artist discusses her use of materials and how her exhibition has shifted over the course of its run. 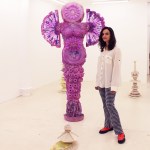 A purple LED light floods the staircase leading visitors down to the show. It’s the kind of light often used to grow plants indoors. In this basement exhibition, concepts like day and night begin to fade away. The staircase is usually a functional space, but I wanted it to become part of the artwork: I titled this piece #+40.01.

After spending time under the purple light, you’re left with a green afterimage when you enter the gallery. The longer you stand in front of the purple light, the more intense the experience becomes. It lasts quite a long time, but slowly, the look of green light starts fading away.

The plexiglass I used to make some of the sculptures—#+40.06 and #+40.02—is similar in aqua-greenish color to the afterimage. There’s no green light in here, even though it might seem like it. What you see is either the afterimage, or reflections from the plexiglass. I like to play with the truth of an image and the reliability of our perception: it’s fascinating how just this purple light can manipulate our entire understanding of what we are looking at.

I often use materials that have seemingly contradictory meanings or functions. For instance, I bought large bags of salt, and then dumped them on the floor, smoothing the salt with my hands and a rake: it felt like playing in a sandbox. Salt destroys some materials but is used to conserve others. I’m always looking for these kinds of contradictions in my work as a way to ask: what is the truth?

#+40.02 incorporates parts of a museum climate control system used to regulate temperature and humidity. Usually, you don’t see this infrastructure. The salt under your feet feels more stiff and firm in the areas closer to the water source; it’s looser and softer elsewhere.

I show plaster molds of objects in #+40.04 and #+40.07. But for #+40.06, I first made molds of different things—a branch, for example—then poured in molten aluminum. The metal, which is very hot, burns away the object inside the mold. The process leaves behind different textures in the plaster, depending on the object that was burned. For #+40.06, I cast the corner of a picture frame in aluminum, which is displayed on a plexiglass version of a Donald Judd bench that here is used like a low shelf. Like the salt, this casting process involves simultaneous preservation and destruction: it yields, for instance, a very solid and stable facsimile of the frame, but the original is burned away.

I worked with a neon fabrication company to produce the neon sculptures draped over the plexiglass, set in the molds, or sitting on the salt floor. Usually, neon works are flat on the wall, but these occupy a three-dimensional space. The glass shapes were quite difficult for the factory to blow because the structures rely on various supports, which are difficult to use while the glass is molten. The tubes are very fragile. But I’m interested in questioning what, exactly, a material is supposed to do. I left the cords visible—I didn’t want to hide their function—and draped them in a loose way to mimic the neon forms. During the run of the show, the cords’ positions have shifted and they’ve become partially buried in the salt.

I love that the salt moves and the afterimage changes over time, and the work becomes something new during the exhibition. My work is always iterative, meaning that I use elements from older installations in new works and recontextualize them. For instance, the neon pieces trace the edges of found plaster molds: the molds came first, and the neon tubes respond to them, sometimes tracing their contours. That’s why my titles are always numbers.

—As told to Emily Watlington