Here’s a piece on the history and newest iteration of the Royal Museum for Central Africa in Belgium. “The main problem, of course, is that so many monuments and museums were built a century or more ago by people who took colonialism, racial hierarchy, and slavery (or at least a benign Gone With the Wind view of the American South) for granted,” Adam Hochschild writes. [The Atlantic] 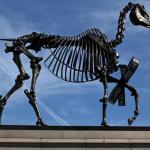 MoMA PS1 in Long Island City has released the first details about the fifth edition of its “Greater New York” survey exhibition of contemporary works made in the New York area. The show will open in fall 2020. [The New York Times]

The sixth edition of the Lubumbashi Biennial in the Democratic Republic of the Congo included works by 42 artists, including Ibrahim Mahama and Emeka Ogboh. “Like every biennial, this one too faces the challenge of proving its relevance to city residents and their more material needs,” Siddhartha Mitter reports. [The New York Times]

Spanish police are looking into a 17th-century wooden statue of a saint that was shown at the European Fine Art Fair (TEFAF) in New York in November to determine whether it was illegally sold by nuns in Granada. [The Art Newspaper]

In an op-ed, writer Michael Massing outlines “how the superrich took over the museum world,” pointing to the ways artists and the content of exhibitions are impacted by the financial forces at work at such institutions. [The New York Times]

In case you missed it: a five-story town house in New York’s Greenwich Village neighborhood that was decorated by painter and filmmaker Julian Schnabel and his former wife Jacqueline is on the market for $18.5 million. See inside the home in this slideshow. [ARTnews]

The Bennington Museum in Vermont has appointed Joshua Campbell Torrance, who most recently helmed the Woodlawn Museum, Gardens, and Park in Maine, as its next executive director. [Associated Press]

And here’s a selection of images commissioned by the New Yorker this year, from a portrait of Adam Driver to new work by artist Alex Prager. [The New Yorker]