With protests roiling Hong Kong, Art Basel has been working to keep dealers committed to participating in its annual fair there, which runs March 19 through 21, by providing various kinds of discounts and incentives. Yesterday, Art Basel sent an email to participating dealers, offering them some flexibility: by providing the option for them to reduce their booth size, and by lowering the withdrawal fee to 75 percent of the booth’s total cost, down from the 100 percent it would normally charge so late in the game. The fair also said that, if it is forced to cancel the event “for reasons outside of our control” it would refund 75 percent of the booth’s costs. 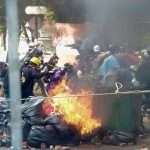 It has been reported that the fair, which began in 2013, has been offering discounts of as much as 10 percent on items like lighting and floors for the booths, and partner vendors such as hotels have also extended possible deals.

ARTnews spoke to a wide variety of dealers, few of whom were willing to comment on the record, given importance of Art Basel business to their bottom line. Most said they are satisfied that the fair organizers are doing their best in a complex situation, though a few questioned the appropriateness of holding an art fair in a city where protestors are risking their lives every day to support a more democratic Hong Kong.

“When one sees the images in the media,” said Sean Kelly, the founder of an eponymous New York and Taipei gallery participating in the 2020 fair, “one feels very strongly that one wants to stand for those fighting for democracy and in some cases their lives. But the corollary to that is if one doesn’t attend the fair, one is letting down a much larger percentage of the population who voted resoundingly and definitely supported democracy but at the same time … are people who are trying to support their family. There are taxi drivers, the laundresses, the busboys, all of the people who work in the infrastructure that surrounds the fair who are in dire circumstances financially because of the ongoing issue in Hong Kong. … I think it is a very difficult, very complicated, and nuanced situation.”

No dealer ARTnews spoke with indicated that they would be dropping out. Tourism in Hong Kong has fallen substantially since the protests began in June, and the city arguably needs the support of a major event like Art Basel Hong Kong.

Dealers, particularly those with branches in Hong Kong, have been watching the situation closely. Hauser & Wirth indefinitely postponed an Annie Leibovitz show in November, while David Zwirner has said that the market in the city remains strong.

Art Basel’s statement to dealers follows in full below, with additional comments from the fair at the start.

We are following the political situation in Hong Kong closely, and while no gallery has withdrawn from the fair since we announced the galleries list in mid-October, it has naturally raised concerns about Art Basel Hong Kong next year.

Yesterday, December 16, we sent an email to exhibitors reiterating our commitment to delivering a strong show in March 2020, and outlined the significant additional resources we have invested into promoting the fair, through VIP outreach efforts, enhanced marketing and expanded programming, to ensure the highest quality show possible. But most importantly, we shared that if we were forced to cancel the show for reasons outside of our control, we would refund at least 75% of the exhibitor’s booth fee – substantially mitigating the financial risk of participation for our exhibitors.

In addition, since we deeply value our relationship with our gallerists – and recognize the paramount importance of mutual trust in working together – we offered galleries the following one-time opportunities given the exceptional circumstances relating to the next Hong Kong show:

Normally, galleries withdrawing at this stage would owe 100% of their booth fee; however, we will honor the earlier withdrawal fee of 75% – that was in effect from October 1 to November 30 – until December 23, 2019.

We hope that this communication and the various options it outlines reaffirms both our commitment to Hong Kong, which has been our home since 2013, but also our dedication to supporting our galleries in every way possible.”