Thomas Hart Benton, a key painter of the Regionalism movement in America during the 20th-century, has recently been the subject of major exhibitions and big auction records—in 2015, for example, his painting Ozark Autumn (1949) sold for $4.86 million at Christie’s in New York. Now, his estate has become embroiled in a legal skirmish involving the alleged mismanagement of the artist’s estate.

Benton’s heirs are suing UMB Bank, which is run by the Kansas City–based Kemper family, for allegedly losing and neglecting some of the artist’s works. According to a report by the Wall Street Journal, Benton’s daughter, Jessie Benton, and her three children filed a lawsuit in the Circuit Court of Jackson County, Missouri, on Tuesday against the bank, claiming that it charged the Benton trusts it manages “hundreds of thousands of dollars” to build a climate-controlled space, only to allegedly later remove the artist’s works from it. The suit also alleges that the bank sold some of Benton’s artworks without keeping track of them. 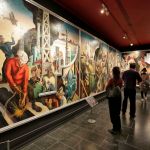 “We take our role as a trustee for art and other assets seriously and will directly address and defend the misguided allegations made in the lawsuit,” UMB Bank said in a statement to the Wall Street Journal. “We look forward to this matter being resolved as quickly and fairly as possible.”

Benton is best known for his undulating landscapes and scenes of everyday life in rural America, and his contemporaries included Grant Wood and John Steuart Curry. His pieces can be found in the collections of the Metropolitan Museum of Art in New York, the Smithsonian in Washington, D.C., and the Nelson-Atkins Museum of Art in Kansas City, among other institutions.