West London storage center will be empty by late 2022 following move to the new art collection center in Olympic Park. [The Art Newspaper]

The Museum of Hangovers opens in Zagreb, Croatia. [CNN]

A British artist is using the profits from her paintings to help protect the Brazilian rainforest. [BBC]

The Year in Review

ARTnews senior editor Alex Greenberger looks back at the screen-based works that defined this year, from Hito Steyerl’s latest solo show to a 14-and-a-half-hour film. [ARTnews] 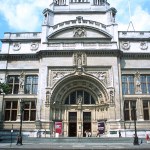 A Smithsonian symposium has asked art experts to weigh in on the strength of the community museum after 50 years and envision its way forward. [Smithsonian Magazine]

Kriston Capps considers how Kehinde Wiley’s “Rumors of War,” which was recently installed in Richmond, Virginia, tackles the legacy of Confederate monuments. [The New Yorker]

Benoit Faucon looks back on female directors and actors in the Islamic Republic who are testing the limits of censorship and taking charge on both sides of the camera. [The Wall Street Journal]

Roslyn Sulcas on “Deineka/Samokhvalov,” an exhibition at the Manege Central Exhibition Hall in St. Petersburg, that highlights two artists usually understood within the context of Russia’s Socialist Realist movement. [The New York Times]