Pimentel is best known for her “Envolvimento” series , which she worked on intensely in the late 1960s and continued until 1984. A selection of 27 such works (whose title translates to “entanglement” or “involvement”) were the subject of a solo exhibition at the Museu de Arte de São Paulo (MASP) in 2017, as part of the museum’s Year of Sexuality exhibitions.

The works are seemingly innocuous interior scenes of bedrooms, living rooms, kitchens, all painted in a distinctly Pop style in muted reds, yellows, greens, blues, and blacks. But each scene contains a pair of white legs poking out from the edge of the canvas. In one, an open handbag filled with makeup and other things sits on the lap of an unidentified subject (presumably Pimentel). 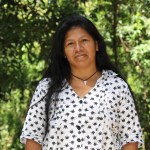 In another essential work included in “Radical Women”—Transposição 1, from 1968—the sitter is reclining on a green couch looking at a TV set. Pictured on the screen is the scene repeated over and over again, as a mise en abyme. In another piece, included in the MASP show, a red kettle seems to overflow on a green stove—to the left, the pair of legs walks across the counter.

In an essay on the Brazilian artists in the “Radical Women” exhibition (which showed at the Hammer Museum in Los Angeles, the Brooklyn Museum, and Pinacoteca São Paulo), Maria Angélica Melendi wrote that many Brazilian women—like other women artists the world over—“addressed women’s place in the domestic setting.” In the case of Pimentel’s long white legs, “the female figure in these domestic spaces is a headless being; we can assume the she looks downward and sees her body in the precious confinement of her home.”

But through her work, Pimentel fights against the notion that a woman should be content in the home. Her works are in fact acts of resistance, particularly in an era in which the Brazilian dictatorship was cracking down on political protests. As Melendi concludes her essay, “Whether identified or anonymous, partly undressed or in costume, fragmented or wounded, the body in works by these artistically outspoken Brazilian artists who have steadfastly refused to be sonsa, or to ‘play dumb,’ is continually put on the line, displayed, and essentially reappropriated from traditional eroticized or objectifying representations, empowering women to be, to look, to present, to represent, and to speak (or to speak back).”

Wanda Pimentel was born in 1943 in Rio de Janeiro, where she would be based throughout her career. In 1965, she began training at the school of the Museu de Arte Moderna do Rio de Janeiro with artist Ivan Serpa, who was one of the founders of Brazil’s constructivist movement Grupo Frente. Her time under Serpa would prove formative, influencing the hard lines she achieved in her own painting.

Pimentel had her first solo exhibition in 1969 at the Galeria Relêvo in Rio de Janeiro, which then traveled to the Galeria Debret in Paris, where she also had work on view in the Bienal de Paris representing Brazil. In 1971, her work was also included in the 11th Bienal de São Paulo. Pimentel would continue to show work over the years, primarily in Brazil. She departed from her well-known Pop works when she created series titled “Bueiros” (Manholes) and “Portas” (Doors) in the late 1970s, “Invólucros” (Capsules) and “Linhas” (Lines) in the 1990s, “Animais” (Animals) in the 2000s, and “Memórias” (Memories) in the 2010s, among others.

In 2014, Adriano Pedrosa included Pimentel in his exhibition “artevida,” co-curated with Rodrigo Moura, that showed at four venues in Rio de Janeiro. That exhibition looked at the relationship between art and life between the late ’50s and early ’80s. The show, with an international cast but a large contingent of Brazilians, included many women artists, placing Pimentel’s work alongside that of Lygida Clark, Anna Maria Maiolino, Geta Bratescu, Teresa Burga, Senga Nengudi, Yoko Ono, Cecilia Vicuña, Yvonne Rainer, Nancy Spero, Eleanor Antin, and more.

The following year Pimentel’s work was included in the important traveling exhibition “International Pop,” which was organized by the Walker Art Center and looked to retell the story of Pop art as a movement that was far-reaching, with artists outside the United States and Western Europe sharing similar concerns as the style’s more well-known practitioners.

But it was the inclusion of three of her work in “Radical Women: Latin American Art, 1960–1985” that brought Pimentel to international prominence. As curated by Cecilia Fajardo-Hill and Andrea Giunta, her pieces were included in a section related to self-portraits, alongside the likes of Judith F. Baca, Yolanda López, Patssi Valdez, Marisol, Teresa Burga, Letícia Parente, and Regina Vater.