Rosa Barba, an Italian artist who studied theater and film in Germany in the early 1990s, uses analog film to examine the mechanisms of perception and memory and to explore—often by shooting in remote locations—what she has called the “margins, interstices, and interludes” of society. Her works have ranged from experimental installations like Machine Vision Seekers (2004), in which a moving projector throws words onto the walls of a darkened room, offering viewers a chopped-up narrative without images, to films like Outwardly from Earth’s Center (2007), an impressionistic portrayal of people attempting to stop the island they live on from drifting. Barba’s exhibition at Arter consists of “The Hidden Conference” (2010–15), a trio of 35mm films depicting the lives of art objects when they are not on display. 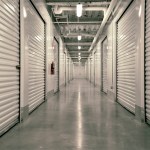 In 2010, the Museo Nacional Centro de Arte Reina Sofía in Madrid invited Barba to orchestrate an exhibition of works from its modern art collection. The fruits of her nine-month research, “A Curated Conference: On the Future of Collective Strength within an Archive,” comprised forty-three works, dated between 1917 and 2008, by artists including Marcel Duchamp and Louise Bourgeois that she saw as sharing interests and conducting a time-spanning “subconscious dialogue” with one another. This schema inspired “The Hidden Conference.”

Barba, using a handheld camera, shot the films in storage facilities belonging to Berlin’s Neue Nationalgalerie for About the Discontinuous History of Things We See and Don’t See (2010); Rome’s Capitoline Museums for A Fractured Play (2012); and Tate Modern in London for About the Shelf and Mantel (2015). “At an unspecified point in time, a witness observes the silent encounter of art works from different epochs,” the opening text in the first film reads: “Some of the protagonists ignore him, while others are friendly and invite him to join them.” In the film, Gerhard Richter’s Seascape (Sea-Sea), 1970, moves, as if by its own will, next to a landscape painting, while Michelangelo Pistoletto’s stainless steel Man with Shirt (1962) is shown coexisting with less easily identifiable works. Although the films, which are projected on three screens placed on the floor, show works in a kind of conversation, that conversation is purely visual and conceptual, with the works—wrapped in plastic, strapped to racks, and at times only dimly lit—appearing as if in hibernation. No museum staff members are seen in the films. Automated mechanisms move paintings along climate-controlled corridors; the same sculptures crop up in different spaces, with no sequences showing how they got there. The scenes raise questions about inclusion and exclusion in museum collections and displays: What happens to the value and understanding of an artwork when it is not publicly visible? What unseen forces are behind the decisions to put certain works on view and keep others locked in vaults?

Barba’s partner, Jan St. Werner, a composer and one half of the German electronic duo Mouse on Mars, produced the films’ soundtracks—minimal compositions that combine sounds of the storage facilities (human voices, the buzzing of lights) with samples including dialogue and music from Italian movies. The protean soundscapes echo the shifting focus on-screen, where the footage moves between labels, metal fixtures, and marble arms and heads.

At the gallery entrance, Barba has placed a chart diagramming links between the paintings and sculptures that participate in her “conference.” The image, which recalls Alfred H. Barr Jr.’s famous 1936 illustration of modern art movements, shows the connections strictly by way of lines, without explanations, and the rationale for those connections is difficult to glean. What the “Hidden Conference” project does convey clearly is the selective nature of the canon. In the films, Barba—using a medium whose growing obsolescence suits the status of objects removed from circulation—shows that art history relies just as much on concealing as on exhibiting.