“A discipline enters into a state of self-consciousness, writes its own history, and theorizes its practices when something is unresolved,” the New York University art historian Christopher S. Wood, a preeminent scholar of the German Renaissance, writes in his new book, A History of Art History. His observation refers specifically to the first historiographies of art that emerged in 1920s Germany, once art history had been absorbed into the university and fully professionalized as a field of study, but it’s also something of a self-reflexive wink to the reader: the historiographical impulse rears its head at moments of disciplinary crisis, he tells us, as we hold in our hands his work of historiography. 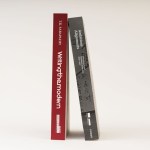 Fitting, then, that Wood’s study isn’t the only prominent survey of art history to appear in late 2019, at a moment when art’s relationship to its institutional and discursive frames has been cast into question in new and fundamental ways. Released on its heels this fall was the art historian Éric Michaud’s The Barbarian Invasions: A Genealogy of the History of Art, originally published in French in 2015. Though their protagonists overlap, the two books are strikingly dissimilar in both tone and argument. Yet each in its own way constructs a polemic about art history’s present through a chronicle of its past.

A History of Art History ostensibly traces the major arcs of art historical writing from the Middle Ages to the mid-twentieth century, but Wood’s primary interest is not the development of academic art history per se, so much as “a history of historical thinking about art.” Although his narrative begins with the proto-iconographer Adam of Bremen—who, in the eleventh century, noted the typological similarities between depictions of pagan gods from different traditions—art history as a discipline proper emerges only when relativism enters the picture. Art becomes historical when the chroniclers of art stopped measuring its quality against a timeless ideal—in Europe, the art of Classical Greece and Rome—and began judging artworks in relation to the periods in which they were created.

Thus the “zero hour of art history” for Wood isn’t, as conventional wisdom has it, the publication of Giorgio Vasari’s Lives of the Artists in 1550, or Johann Joachim Winckelmann’s The History of the Art of Antiquity in 1764, but the moment, slightly later in the eighteenth century, when a handful of antiquarians and collectors started to pull previously disregarded medieval panels out of storage and make apologies for them. This sets in motion a drastic revision of the understanding of an artwork’s value: “Relativism expanded the canon, revealing that great art has been made in all times and places. It may look different, but it isn’t.” This opens up the possibility for the “biographies of form” that appear at the turn of the twentieth century, emblematized by the work of Alois Riegl and Heinrich Wölfflin, whose tenets are basically familiar to anyone who has read an art history textbook in the past seventy or so years.

A History of Art History is ultimately far less conventional or authoritative a study than its title—and jacket copy—suggests, its narrative largely constructed through vignettes, aphorisms, and parables. Still, Wood’s intimacy with the material is self-evident. He offers any number of remarkably lucid exegeses of complex and easily misunderstood concepts (Riegl’s Kunstwollen) and texts (Hegel’s Lectures on Aesthetics), and brings in numerous lesser-known thinkers. But it’s hard not to come away with the sense that this twisting and turning chronology is really a three-hundred-plus-page prologue to the real argument of the book: in the conclusion, Wood finally makes explicit the disciplinary crisis that prompted his historiographical reflection, and in a curious sleight of hand, the problem isn’t contemporary art history at all, but contemporary art.

Art today, Wood argues, preempts historical reflection, because it already takes the stuff of contemporary culture—“advertising, fashion, celebrities, television, tattoos, toys, comics, pornography, politics, iPhones”—as its manifest content; now, art history “has nothing to say about mass culture that art itself doesn’t already tell us.” Arguably, the art of the past did this too, even if the culture to which it responded moved at a less unrelenting pace. More fatal for the discipline, Wood insists, is the fact that artists are “no longer preoccupied with form.” The art historian’s training and tools, developed in response to objects self-consciously marked off from other kinds of things in the world, are ill-suited to contend with art that “redistributes itself in events, vectors, emotions, ideas, clusters or swarms of artifice.” This, for Wood, is the belated upshot of modernism, whose program is fundamentally rooted in “the refusal of the authority of the past.” Modernism opened a door that can’t be shut; now art is doomed to a permanent present. In the end, this volume is less a history of art history than an elegy for it.

Michaud’s book, by contrast, is an indictment. Barbarian Invasions also treats the reevaluation of Gothic art as pivotal, but, for Michaud, a professor at the École des hautes études en sciences sociales in Paris, that revision is part of a larger game, inextricably bound up in the racial logic of European nationalism. The origins of art history as we know it, Michaud argues, can be found in the Romantic myth of the barbarian invasions: the entrance of the so-called Germanic tribes into Europe in the fourth and fifth centuries CE, putting an end to the Roman Empire.

What had previously been considered a catastrophe for art and culture was reconceived, in the nineteenth century, as an event that reinvigorated a stagnant and decadent Rome with new blood and, with it, a new creative vitality. As in Wood’s narrative, the Classical ideal is thus relativized and brought down to earth—as Michaud puts it, this is the “descent of art into historical consciousness”—but in this account it is replaced by the notion of eternal and unchanging “races.” From this point onward, Michaud writes, “the art object was called upon to speak to the identity no longer of its individual creator, but also to that of the ethnic group—‘people’ or ‘race’—that was understood to have produced it.”

As Michaud outlines, the precursor for the racialized theory of art was none other than Winckelmann, a committed partisan of the timeless Classical ideal who nevertheless understood the development of artistic style in biological terms: the life cycle of a style corresponded to that of an entire people. Increasingly, Winckelmann came to see the link between biology and art as more than just metaphor, arguing that the beauty of Greek statues was a direct reflection of the beauty of ancient Greek people: “Our nature will not easily bring forth such a perfect body as that of [the statue] Antinous Admirandus,” he wrote in Reflections on the Imitation of Greek Works in Painting and Sculpture (1755). The ideal “Greek profile” found in classical sculptures “was as peculiar to the ancient Greeks as flat noses are to the Kalmucks and small eyes are to the Chinese.” The idea of an innate link between biology and artistic form could then be politically yoked to race by nineteenth-century Romantics like Germaine de Staël and Friedrich Schlegel, who envisioned European culture as fundamentally marked by the battle between Latin and Germanic forces.

This binary persisted well into the twentieth century in the formalist art histories of scholars like Riegl and Wölfflin, who set principles of form—implicitly or explicitly associated with distinct nationalities—into opposition. As Michaud makes clear in the book’s most chilling chapter, which extends the argument of his earlier study The Cult of Art in Nazi Germany (2005), these are hardly just academic distinctions: the nineteenth-century racialization of art participates in the emergence of a racially based anti-Semitism that replaced the rehabilitated figure of the barbarian with the “artless Jew” as the enemy of beauty and would-be destroyer of European culture.

Like Wood, Michaud is troubled by the direction of contemporary art, but he frames the problem very differently. Trouble starts when art-making and criticism fall prey to art history’s fundamental obsession with racial origins. The dangerous error remains alive today in an “ethnicization” of non-European contemporary art, the tendency to locate a privileged authenticity in “indigenous” aesthetics, treated as fixed and immutable. Here, art history comes full circle, Michaud argues, envisioning form, once again, as an essential expression of race, only now displaced onto an “other” expected to produce it for a global audience.

These are clearly pessimistic historiographies, imagining the discipline to be permanently cut off from its past heights or, alternately, damned from its very outset. But it’s notable that the authors have very little to say about art history as it is practiced today. In both books, the main narrative ends around 1960; when the story jumps to the present, it focuses not on new ways of understanding the past, but solely on contemporary art—whose mode, we are told, is amnesia. This shift betrays—especially in Wood’s case—a profound anxiety about whether art history has a future.

This article appears under the title “Lives of the Art Historians” in the January 2020 issue, pp. 28–30.