More than three dozen artists have signed an open letter to leadership at the Museum of Modern Art and MoMA PS1, urging the institutions to divest themselves from board members who receive funds from potentially problematic sources. [ARTnews]

After Joshua Helmer, the former Erie Art Museum director, was accused of harassment, staff members at the Philadelphia Museum of Art, where he used to work, have said that the allegations “barely scratch the surface.” [The Philadelphia Inquirer]

Painter George Condo, who is known for his Picasso-like images of people with mismatched body parts, is now represented by Hauser & Wirth. [ARTnews] 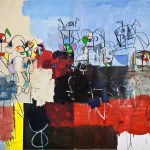 A Damien Hirst medicine cabinet sculpture is expected to sell for as much as £1.8 million ($2.34 million) at Phillips auction house in London next month. [The Art Newspaper]

With protests still ongoing, Art Basel Hong Kong has lined up Lee Bae, Mike Nelson, Asad Raza, and more for its “Encounters” section for large-scale installations at its fair in March. [ARTnews]

Stan Douglas will represent Canada at the 2021 Venice Biennale. While this is the first time Douglas is doing a national pavilion, it’s his fifth time overall showing at the festival. [ARTnews]

Betty Pat Gatliff, a sculptor who created images of missing persons in the hope of helping the police solve their disappearances, has died at 89. [The New York Times]

With a new show on view in New York, artist Hock E Aye Vi Edgar Heap of Birds, who is known for his pointed statements about the exploitation of Native Americans throughout history, gets the profile treatment. [Forbes]

Cecily Brown has been selected as the latest artist to do commissioned work for Blenheim Palace, an 18th-century country home in Oxfordshire, England. [The Guardian]

A reality show will chronicle billionaire collector Yusaku Maezawa’s quest to find a girlfriend to go to the moon with him. [Syfy Wire]