Barbara Kruger, who is known internationally for her text-based works that convey aphorisms about consumer culture and political issues in bolded lettering, made headlines last year when she joined the mega-gallery David Zwirner. Now, after heading to one of the world’s biggest galleries, she’s going to have one of the largest shows of her career.

On November 1, a major survey of Kruger’s work will open at the Art Institute of Chicago. Titled “Thinking of . I Mean . I Mean You.,” it will feature four decades’ worth of art and is expected to be the biggest Kruger show in 20 years. Between 1999 and 2000, the artist had a mid-career retrospective that first opened at the Museum of Contemporary Art, Los Angeles and traveled to the Whitney Museum in New York. 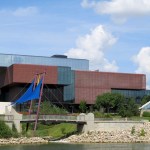 Rarely seen works created by the artist in the early 1980s will be included in the Art Institute of Chicago retrospective, along with new pieces. The exhibition was designed in collaboration with the artist, and its iteration in the Windy City will span the museum’s interior and exterior spaces, with multi-channel videos and large-scale installations among the offerings. Additionally, an audio soundscape will reach throughout the museum. Kruger’s presence will also be felt throughout the city of Chicago, with her work reflected on billboards, buses, and public transit fare cards.

Kruger is best-known for her works making use of sans-serif text that recalls advertising. Often associated with the Pictures Generation, a group that rose to fame during the early 1980s for work that meditated on the endless flow of mass-produced imagery, Kruger frequently alludes to the ways that mass media degrades women. Among her most famous recent works is a cover for New York Magazine in which she superimposed the word “LOSER” over a photograph of Donald Trump’s face.

“Thinking of . I Mean . I Mean You.” is set to run at the Art Institute of Chicago through February 14, 2021, after which it will travel to MoMA PS1 and the Museum of Modern Art in New York. In fall 2021, the show will head to London’s Hayward Gallery before making its final stop at the Los Angeles County Museum of Art.

James Rondeau, president and director of the Art Institute of Chicago, said in a statement that the exhibition “pushes against the notion of a career as a relic or a chronological checklist.”