Christie’s London Evening sale of Contemporary art had few star lots—but only one that failed to find a buyer—yet it managed to pull in a total £56.2 million ($72.8 million), down little more than a quarter from the previous year’s comparable sale. Two lots, one by Christopher Wool and one by Glenn Ligon, were withdrawn before the sale, leaving nevertheless an outsize number of lots—56—for the time and venue. Christie’s managed the sale exceptionally well, including convincing the consignor of a Gerhard Richter constellation painting to accept a price two-thirds of the low estimate.

Overall, the sale continues to reinforce the impression that the Contemporary art market has compressed toward works in the so-called middle market price band, below $5 million. 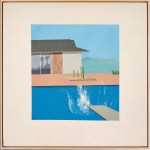 The night’s top lots were the late West Coast collector Richard L. Weisman’s commissioned portrait of Muhammad Ali by Andy Warhol, which made £4.97 million. It was the lead lot among the ten sports figures depicted by the artist at Mr. Weisman’s request. Kareem Abdul-Jabbar, Jack Nicklaus, and O.J. Simpson were also legendary personalities from the series who sold better than their estimates. Jean-Michel Basquiat’s Mosque sold for £3.9 million, falling below its low estimate but still ranking among the most valuable lots of the evening. The same was true of Sigmar Polke’s untitled work, which reached £3.13 million while also failing to reach the low estimate. David Hockney’s 2006 landscape Walnut Trees sold well at £3.25 million, to come fourth among the lots sold by value.

Albert Oehlen’s Mission Rohrfrei (Down Periscope) from 1996 continued the artist’s market run, being the first of the top ten lots to achieve its price through aggressive bidding. The final price of £3.19 million reflected a hammer price of £2.65 million that edged slightly above its £2.5 million high estimate.

Several other lots that enjoyed aggressive bidding began the sale with strong momentum; they were all by painters now familiar to the market. Jordan Casteel’s Mom (2013) set a record price for the artist at £515,250, reflecting a hammer price well over the £250,000 high estimate. Another young female artist, Tschabalala Self, surfaced at the start of the sale with lively interest from potential buyers. Six telephone bidders jumped in early, overwhelming the three bidders in the order book held by Jussi Pylkkänen. The initial frenzy raised anticipation but the bidding for Spare Moment petered out over the £120,000 high estimate to sell eventually for a solid but perhaps less-than-hoped-for £170,000 on the hammer, or £212,500 premium. Self’s auction record, set in October 2019, remains substantially higher at $486,461 which in that case reached about five times the low estimate.

Later in the sale, an untitled work by Gotthard Graubner went for £491,250, following the artist’s success last year in a Day sale of a similar monochrome work (that one in gold) that sold for £150,000. In the year prior, another Graubner work sold in a Sotheby’s Evening sale was the first of the artist’s work to come to auction in nearly a decade.

Günther Förg’s untitled series of paintings on lead and wood sold for £1.33 million, increasing his auction record by several hundred thousand dollars. Earlier in the sale, one of Förg’s decorative works a full 13 feet wide sold at the low estimate for £731,250.

Antoni Tàpies, the Spanish painter, achieved a record with his mixed-media assemblage, Pintura del Cubell, which sold for £851,250. The price reflected strong competition for a work that has been held in the same collection since 1988.

Grayson Perry did well with Emotional Landscape, which sold slightly better than his ceramic jar positioned similarly in the previous night’s sale. At Christie’s, the work made £187,500. Also following a strong sale from the previous night was Eddie Martinez, whose Cannibal Eyes made £347,250 over a £180,000 high estimate.

The final strong sale of the evening was Howard Hodgkin’s Like an Open Book from the collection of Jeremy Lancaster, which Christie’s has been selling over the course of several months. That work sold for £443,250, more than double the high estimate, with the buyer’s premium.