Marble sculpture of three headless nude women with their arms around each other.

Above are three descriptions of Marble Statue Group of the Three Graces (second century AD) in the collection of the Metropolitan Museum of Art in New York. Three different people wrote them, compared them, then created a single description for the alt-text field of the museum’s app: “Fragmented marble sculpture of three nude women, with missing heads, and their arms around each other.” Alt texts (also called alt tags and alt attributes) are descriptions of images intended for blind and low-vision people who access them using software called a screen reader, which converts the text into braille or audio. Instead of repeating caption information noting a work’s medium or providing historical background, alt texts describe what sighted visitors would see. The succinct descriptions—the Met’s guidelines recommend thirty words or less—are embedded in a website’s HTML code. Most users likely never notice them. 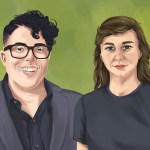 Describe what you see: it’s a somewhat straightforward request that has opened up complicated debates about access, labor, and description practices in the art world and beyond. In 2019, more than a hundred lawsuits were filed against New York galleries whose online images lacked alt tags. At least thirty-seven of the suits were filed by Deshawn Dawson, a blind Brooklyn resident who claimed the galleries were in violation of the Americans with Disabilities Act (ADA), which requires that businesses and public places accommodate disabled people. In 2017, the Trump administration stalled work meant to spell out exactly how the ADA should apply to the internet. The ADA was signed in 1990, before the first web page went online, and the law’s digital implications have been interpreted in an ad hoc fashion and enforced primarily through individual lawsuits like those filed by Dawson—whether served to museums, galleries, or retailers.

Many organizations view accessibility requirements grudgingly, as a costly way to avoid costlier lawsuits. Businesses and nonprofits with the best intentions can find themselves confused and overwhelmed as to where they should start. Activists, computer scientists, lawyers, and other stakeholders are still working out best practices for alt text. Even successful efforts like the Met’s, which received an Access Award from the American Federation for the Blind in 2014, might not be apparent to most users because alt text is not displayed on a website, but hidden away in its code. That makes it difficult for institutions to find exemplary models. Restricting alt text to users of screen readers also perpetuates the assumption that sighted people do not want to read descriptive texts and cannot benefit from them.

The Museum of Contemporary Art Chicago’s website is an exception because its image descriptions are visible to sighted users who elect to see them by ticking a prominently displayed button. The descriptions offer a glimpse of how screen reader users access artwork, while also providing illuminating alternative perspectives on the work. “Light-skinned hands with vivid yellow finger nails repeatedly massage a large mass of mint-green goo,” reads the description of a scene from Mika Rottenberg’s video Spaghetti Blockchain (2019), which is featured in the artist’s current solo show “Easypieces.” Paired with a short clip from the video that appears as a GIF on the MCA’s website, the text emphasizes the image’s absurdity by describing the unusual scene matter-of-factly. David Mitchell and Sharon Snyder, two scholars of disability studies, write that “disability subjectivities are not just characterized by socially imposed restrictions, but, in fact, productively create new forms of embodied knowledge and collective consciousness.”¹ As readers and writers of art criticism well know, evocative summaries of artworks, including those in the tradition of ekphrasis, are at times more enticing than the works themselves. By choosing to place descriptions alongside the images, the MCA Chicago highlights how this alternative means of accessing art can be its own type of artistry.

While sighted people can benefit from image description, the needs of blind and low-vision people should remain central. Designs intended for disabled people become broadly useful in unpredicted ways. The “curb cuts” created by sledgehammer-wielding, sidewalk-smashing disabled Berkeley students in the 1970s are now integral to urban life, relied upon by stroller-pushers and suitcase-draggers.² Technology historian Mara Mills coined the term “assistive pretext” to describe how disability has served as a motivation for myriad inventions. For example, deaf collaborators played a key role in the early development of telephonic mediums. Alexander Graham Bell’s mother and wife were both deaf, and many of his and Bell Labs’s attempts to transmit sound grew directly out of the “Visible Speech” Bell’s father taught to deaf children, who copied “word-pictures” of pronunciation patterns with their mouths in order to speak aloud. Yet, disabled people’s needs and perspectives, Mills argues, are too-often abandoned when technologies prove useful in more profitable realms.³ The alt text fields on web pages are similarly being co-opted for other purposes. Because Google Images uses the field to “see” an image, organizations can be tempted to populate the field with keywords rather than useful descriptions. An example for Three Graces might read “marble, sculpture, Roman, Antiquity”—written to appeal to an algorithm, not a human. At the same time, allowing the alt text field to service both search engine optimization and blind and low-vision users can be a powerful persuasive tool for convincing corporations that the descriptions are worth the labor investment they require.

Most images on the internet are not described, and this backlog makes retroactively adding alt attributes seem like a daunting task, even when it comes to straightforward descriptions of various toothbrushes for sale on Amazon. Describing artworks is more complicated. For the alt text features on its app, the Met asked three individuals to describe what they saw before merging the results into one. In the case of Three Graces, one description didn’t mention that the women were headless, while another implied a feminist perspective by noting that their bodies were idealized. Three descriptions drafted for Jackson Pollock’s Autumn Rhythm (Number 30), 1950, also in the Met’s collection, read:

A beige canvas filled with intersecting lines and drops of black, white, brown, and teal paint.

“Intersecting lines,” while technically accurate, doesn’t capture Pollock’s signature energy. Yet “splattered” and “energetically dripped” better describe how the lines were made—not what they look like (though, of course, these things are inextricable). Dry descriptions intended to be “objective” can fail to capture an image’s
essence or mood—as cinema scholar Eugenie Brinkema noted in her careful analysis of porn descriptions.4 In the field of art, unsigned texts can give the impression that they are authorless, and therefore neutral and authoritative. The audience for any given description can range widely in its art historical knowledge, or familiarity with colors and other references. It can be astoundingly counterintuitive to avoid language that assumes a sighted audience—terms like “the viewer.”

While this challenge can seem daunting from a logistical perspective, it has proven an exciting formal challenge for artists, whose eagerness museums would be wise to channel. “A distinct aggregation / A dynamic equivalent / A generous ethic of invention: Six writers respond to six sculptures,” a project currently on display at Banff Centre in Alberta, Canada, by Aislinn Thomas with Anna Bowen, Angela Marie Schenstead, Crystal Mowry, Laura Burke, Catherine Frazee, Nicole Kelly Westman, and Shannon Finnegan, approaches some of these problems by offering lengthy, poetic descriptions of six works in the museum’s public art collection. Some writers use the first person or describe personal memories they associate with the works, and all treat description as a creative opportunity. Park McArthur’s PARA-SITES (2018), an audio tour that served as the primary site of, not add-on to, her 2018 solo show at the Museum of Modern Art in New York, similarly treated access as an artistic medium. PARA-SITES described McArthur’s architectural model in the show, as well as spaces that were off-site or not yet built. Visitors were prompted to imagine things they couldn’t see for various reasons. Museums have descriptive audio tours for blind and low-vision visitors, but these are usually separate from the audio tours that provide historical background. McArthur merged the two, and asked all visitors to use the headsets—which were also available as transcripts on MoMA’s website. PARA-SITES highlighted descriptive practices that are common in museums but often overlooked by people who don’t need them.

A growing group of artists working for disability justice have advocated image descriptions by proactively providing them to publications or institutions that request to reproduce their work. Typically, only large institutions have access departments dedicated to tasks like describing images, though this shouldn’t mean that the labor of generating alt texts falls on the artists. There is no one-size-fits-all answer to the question of access labor.

Carolyn Lazard’s guidebook Accessibility in the Arts: A Promise and a Practice (2019) lays out tips tailored to small arts nonprofits. While acknowledging the very real problems of scarce labor and tight budgets, Lazard also point out that many gestures toward making an art space more accessible—strobe warnings, nonalcoholic drink options at openings—require minuscule resources other than thoughtfulness. It’s true that drafting alt text requires significant labor, but so do all the tasks that go into presenting artworks to the public. When organizations say they can’t afford to do something, they often mean they don’t value it. Pleading poverty as a reason to avoid producing alt texts runs counter to the legal and moral imperative to remove barriers. It also wrongly assumes that disabled people are somehow tangential to the art world, a separate class from those with social and financial capital.

In a few years, the labor challenges will be entirely different as artificial intelligence becomes increasingly capable of generating image descriptions. Alt texts are also being crowd-sourced from volunteers on websites and apps like Oh Caption, My Caption. As AI learns, it’s imperative that human-generated descriptions serve as precedents to set the tone and determine shared goals and values. Prime Access Consulting and the MCA Chicago collaborated to create open-source software called Coyote to manage workflow for describing images and storing the descriptions. Coyote also includes practical guidelines for describing artworks.

Ongoing “Alt-text as Poetry” workshops led by artists Shannon Finnegan and Bojana Coklyat have aimed to collaboratively troubleshoot best practices. One major issue is describing the race and gender of people in photos. When scholar Georgina Kleege studied image descriptions produced for films—a well-established practice in the motion picture industry—she observed that narrators would include a character’s race only if they deemed it necessary to understanding a scene, a parameter that is open to interpretation. Typically, film descriptions would mention only the race of nonwhite actors, revealing an unconscious bias toward treating white people as “neutral.”5  In practice, race and gender can be difficult to know from an image. We should also be asking whether we want AI to be trained to identify race and gender, which would open us up to increased discriminatory mass surveillance.

Instead of being at the forefront of imagining future diverse and accessible worlds, most art institutions lag far behind Netflix, movie theaters, and online stores in providing visual descriptions. Arts organizations lack the budgets of these corporations, but as Finnegan, McArthur, Thomas, and Lazard show, artists have the capacity to imagine and prototype new methods for making art accessible. And critics ought to join them: the demand for image descriptions engenders an exciting challenge to revive vivid visual descriptions as a core function of art writing.

This article appears under the title “Demanding Description” in the February 2020 issue, pp. 32–34.