Sotheby’s London contemporary evening sale offered little excitement at the top of the market even as it made £92.5 million ($119.8 million). Three of the 46 lots offered in the sale failed to find buyers (one, a Richter abstract in primary colors, was withdrawn before action began), giving the sale a strong and well-managed 93 percent sell-through rate. That doesn’t mean the sale lacked interest: A work by A. R. Penck set a new record for the German artist, and paintings by Eddie Martinez, Wayne Thiebaud, and Gunther Uecker were bid well above estimates. A sculpture by Maurizio Cattelan, newly notorious after the banana feeding frenzy at Art Basel Miami Beach, was also a surprise hit. 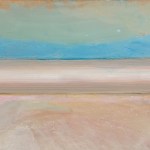 Of even greater interest is the fact that the total was almost exactly the same as the previous year—£93.2 million ($120.7 million)—which came from the sale of 19 more lots. Overall, making the same money with 30 percent fewer lots is worthy of notice.

Among the top 10 lots in the sale were works by David Hockney, Jean-Michel Basquiat, Francis Bacon, Christopher Wool, and Yves Klein, each selling for £6 million ($7.78 million), but none hammered for prices much beyond the low estimate. The top of the contemporary art market remains well-priced, and some observers found the Hockney sale at a healthy £23,117,000 ($29,820,930) to be a disappointment. The guaranteed work had a few bids but saw no great competition.

Another work from the same year, Wayne Thiebaud’s Fruit Stand, a small roadside landscape of, you guessed it, a fruit stand was sold for a mouth-watering £1.8 million ($2.35 million), with fees. The hammer price was £300,000 above the £1.2 million ($1.55 million) high estimate.

Jean Dubuffet’s Épisode Champêtre was also chased by several bidders to £1.8 million ($2.35 million) over the same high estimate level. Clearly, this was a significant price level for the evening because a Roy Lichtenstein painting of grapes estimated a bit higher also sold for £1.8 million.

A step or two down the price ladder, there were strong sales for a Günther Uecker White Field painting of a seemingly swaying mass of the artist’s signature large nails. The work carried a £750,000 ($972,000) high estimate but sold for £1.5 million ($1.96 million), with fees.

At the same price point, Maurizio Cattelan’s untitled work of a female figure meant to be hung from a door frame, replicating a Francesca Woodman photograph, sold for a price 50 percent above the high estimate. This example of the editioned work seems to have been owned by collector Adam Lindemann, who sold it through his Venus Over Manhattan gallery to Thierry Gillier, founder of the Zadig & Voltaire French fashion brand. Gillier sold the work at Christie’s in May 2017 as part of the Zadig & Voltaire collection for $1.5 million.

Tonight the same work made £1.5 million ($1.9 million), a gain for the auction house but only a slight profit for the consignor, who made a little more than $100,000 after holding it for less than three years.

Nonetheless, the small gain was part of a larger market victory. The work carried an irrevocable bid and an attractive £600,000 ($770,000) low estimate. The artist’s recent demonstration of his ability to attract media attention may have helped the consignor squeeze out a little higher price after risking a considerable loss.

A longer selling streak that began in London last October is held by Eddie Martinez, the New York abstract painter who seems to have recently developed a strong following among buyers in Asia. Martinez’s work has been selling London, New York, and Hong Kong, with the sales in South China punctuating his market rise. Tonight, Empirical Mind State came to the auction block with a £350,000 ($453,000) low estimate, substantially higher than the selling prices of several works in London last October. When the bidding was done, the painting had sold for £591,000 ($765,483). That is not quite the $2 million for which one work sold in Hong Kong, but markets are not made only from top prices. Strong sales below the peaks are signals that the market still has depth of demand.

A small Philip Guston painting of two hooded figures did not perform well compared to estimates, but considering that a composition of similar size, and with much more color, achieved last October almost the same price as tonight’s £1.1 million ($1.42 million), it’s hard not to see that as evidence of continuing demand for the artist.

Finally, A. R. Penck quietly set a record price this evening when World of the Eagle I sold for £531,000 ($687,900). The price was within the estimate range, but the record showed the upward path of this artist’s market.